The world of gene editing patents 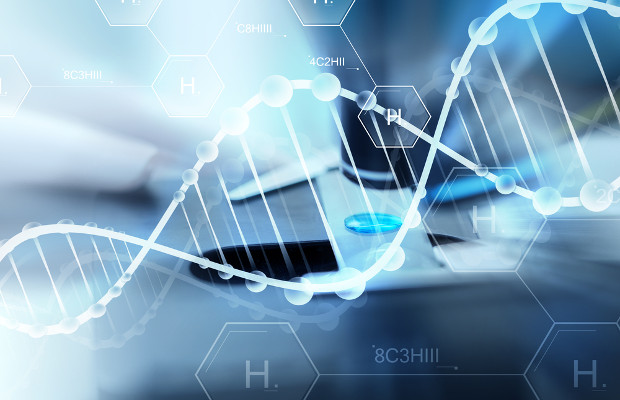 CRISPR is only part of the gene editing story, and by studying the patents associated with all of the various methods, a much clearer picture of the entire field can be generated, says Tony Trippe, senior patent analyst for Thomson Reuters.

For more than 60 years researchers have explored gene therapy, now referred to as “gene editing”. Initial attempts in the 1950s utilised live vaccines to manipulate genetic sequences. More sophisticated methods began to emerge during the 1980s and early 1990s with endeavours to modify human DNA, including the first direct insertion of human DNA performed by French Anderson in September 1990.

The general goal of gene editing is to replace, or disrupt, defective genes in order to provide a therapeutic benefit to the patient. Many genetic-based diseases involve a multitude of genes with complicated interactions and expression scenarios that make direct intervention difficult to manage.

However, there are many diseases that appear to be affected by a single gene, including cystic fibrosis, haemophilia, muscular dystrophy, thalassaemia and sickle cell anaemia, and correction of these defective genes has been the primary focus of therapeutic intervention using gene editing.

Human disease interventions are only one use of this technology. The method is increasingly being used to add desirable characteristics to plants, and useful traits in bacterial species. It can be argued that due to the simpler genomic make-up of some of these organisms gene editing there has been more productive than in humans. While this may be the case it hasn’t stopped scientists from working with human embryos, including a well publicised attempt by Chinese scientists to use gene editing methods on non-viable embryos to correct a mutation that causes beta thalassaemia.

“While The Broad Institute and the University of California receive most of the press coverage in this space, the organisation with the highest number of inventions is Cellectis.”

While this initial attempt was unsuccessful it led to the planning of the International Summit on Human Gene Editing which took place in Washington, DC in December 2015. The collected scientists agreed to continue with basic research, but also stressed the need for appropriate legal and ethical guidelines.

A handful of methods have come to define the most commonly used approaches to gene editing. All involve the use of nucleases: enzymes that can cleave DNA sequences for modifications. The various methods focus on ways these nucleases can be delivered to specific locations in the genetic sequences of the target organisms.

The most widely studied systems include:

Patenting associated with these nuclease based gene editing methods began roughly 15 years ago, and as seen in Figure 1, began accelerating in 2011. 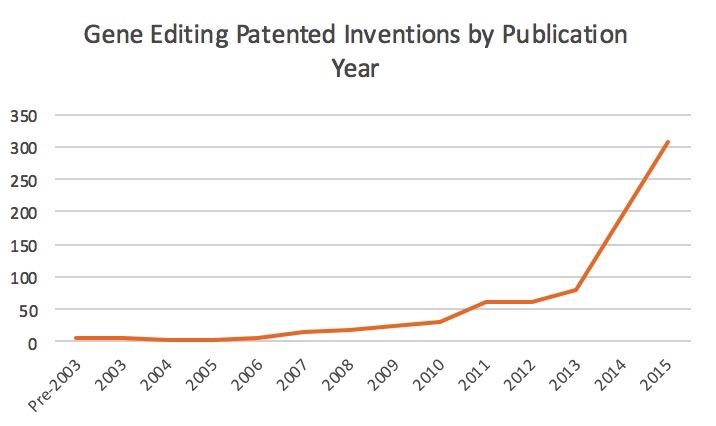 While patenting in this field began increasing in 2011 it started growing exponentially in 2014. It was around this time that the CRISPR method was starting to gain broad acceptance, so it could be assumed that patenting in the CRISPR field was responsible for the rapid growth.

As seen in Figure 2, however, the situation is a little more complicated, and while CRISPR-based methods are responsible for the majority of the growth, it is by no means the only reason that patenting in the area has accelerated. 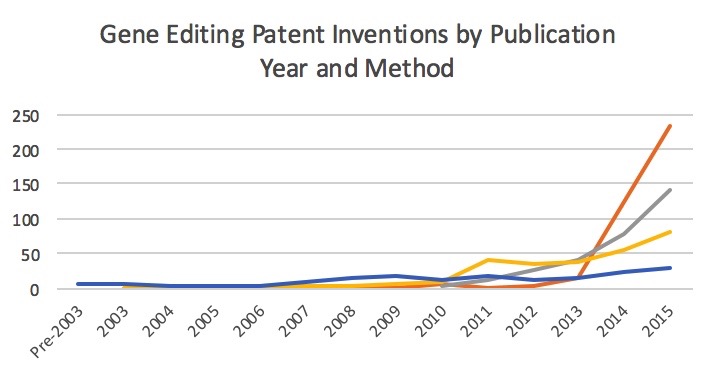 Source: Thomson Reuters Derwent World Patents Index® (DWPISM)- Inventions may be represented in more than one category if more than one method is described.

Figure 2 reveals that patenting with the ZFN, and Meganuclease methods go back to the early 2000s and the observed increase in 2011 is coming mostly from an increased interest in ZFN based methods. Figure 2 also demonstrates that the other non-CRISPR based methods have seen dramatic upswings in patenting, especially TALEN and ZFN.

So while CRISPR is not the only game in town, it has clearly attracted a significant amount of investment by way of patent filings. The method allows for a variety of different protein associations. One of the reasons that this method has become so popular is that the associated proteins for cleaving specific sequences can be changed without having to modify the larger protein system itself, as is the case with the other methods profiled.

Figure 3 plots patenting associated with CRISPR-Cas9 specifically versus the use of other Cas proteins. 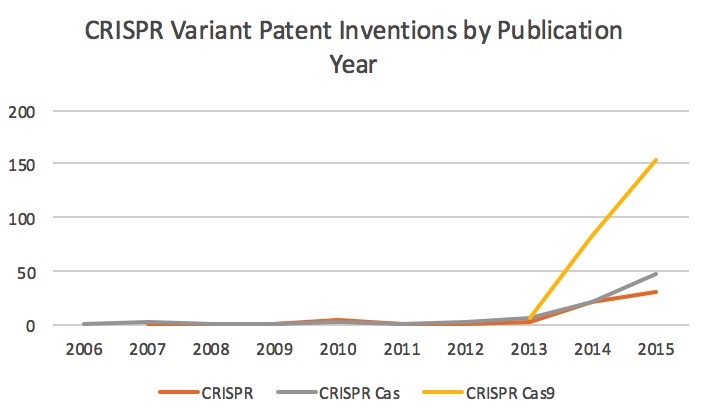 Source: Thomson Reuters Derwent World Patents Index® (DWPISM)—Inventions are represented in a single category even if more than one method is described. The generic CRISPR category for instance does not contain inventions that mention a Cas protein, specifically Cas9.

Figure 3 also shows CRISPR systems that don’t use a Cas protein and instead utilise other related cleavage enzymes. In particular, Cpf1 has begun to gain prominence, but a search for patents covering Cpf1 variants of CRISPR specifically provided a very small number of references. This is not a surprise, since this is a very recent discovery and patents suffer from an 18-month initial publication delay. It will be an area to watch closely in the months, and years ahead.

Patenting in the CRISPR field has received a great deal of attention based on the forthcoming interference proceedings between the Zhang group affiliated with The Broad Institute of MIT and the Doudna group from the University of California system, but as seen in Figure 4 these are not the only two organisations filing patents in the gene editing space. 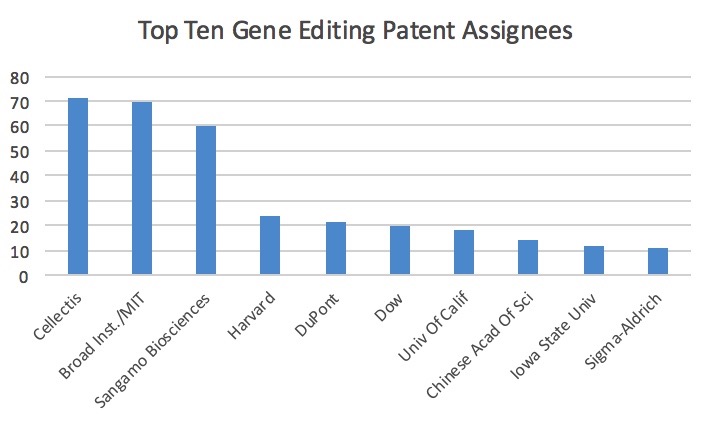 While The Broad Institute and the University of California receive most of the press coverage in this space, the organisation with the highest number of inventions is Cellectis, a company focused on developing adoptive immunotherapies for cancer.

Another observation of interest is that the top ten organisations associated with gene editing patenting are equally distributed between universities and commercial concerns, signalling that this field has begun producing both practical applications and basic research. 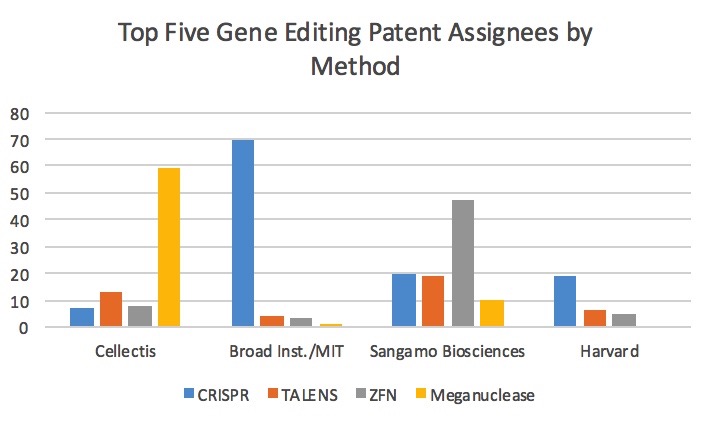 Source: Thomson Reuters Derwent World Patents Index® (DWPISM)– Inventions may be represented in more than one category if more than one method is described.

Cellectis is unique in that most of its portfolio is focused on Meganuclease, the earliest of the methods looked at, and correspondingly its portfolio has some of the oldest inventions among the top ten companies. Cellectis has an interest in CRISPR, but most of its commercial applications use TALEN based methods.

A partnership exists between the Zhang groups at The Broad Institute and the Church group at Harvard so it is not a surprise that these two organisations have large portfolios and are primarily focused on CRISPR-based methods.

Perhaps the most interesting organisation represented in Figure 5 is Sangamo Biosciences, which focuses on the research, development and commercialisation of engineered zinc finger DNA-binding proteins. This concentration on ZFNs can be seen in its portfolio, but they are also exploring the CRISPR, and TALEN methods. In addition to developing human therapeutics, Sangamo also licenses its technology to other organisations for various applications, including Dow for use in plant agriculture, and Sigma-Aldrich for laboratory reagents.

Figure 6 shows both companies portfolios and the technology they license from Sangamo. 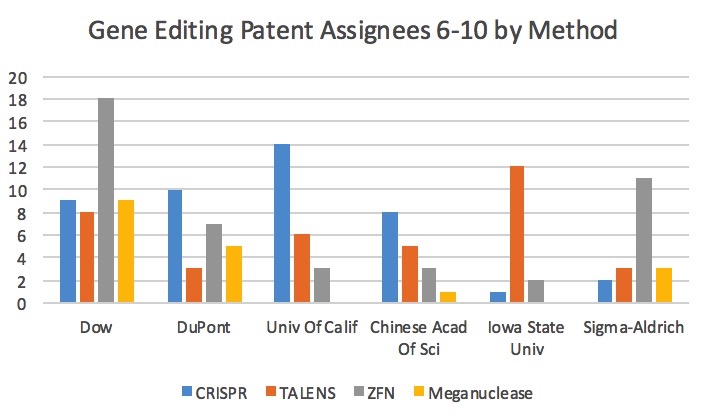 Source: Thomson Reuters Derwent World Patents Index® (DWPISM)– Inventions may be represented in more than one category if more than one method is described

Dow and DuPont are leaders in patenting gene editing methods for crop breeding and transgenic organisms. Both of these organisations use a variety of approaches, and have surprisingly diversified portfolios when it comes to the various gene-editing methods.

Chinese scientists made the news when they began using CRISPR methods to modify human embryos, but as seen in Figure 6, researchers from the Chinese Academy of Sciences has also been exploring the other methods especially the more recent advances in TALENS and ZFN.

As expected, the University of California system is also represented among the top ten organisations, with an emphasis on CRISPR, but once again there is also considerable patenting associated with the other recent methods of gene editing.

Perhaps the most surprising entry in the top ten is Iowa State University, with one of the largest TALEN portfolios. The university’s inclusion can be explained by the fact that Professor Bogdanove while working at Iowa State is considered to be the primary discoverer of the TALEN method in addition to Dr Dan Voytas at the University of Minnesota, and Dr Feng Zhang also at Iowa State University.

CRISPR technology is having an enormous impact on how the scientific community develops applications for gene editing technology, but clearly it is not the only approach being used. Cellectis, the largest patentee in the area for instance has been involved for the longest period of time out of the top ten companies, and while it has recently started using CRISPR methods, most of its portfolio has focused on Meganuclease.

A reasonable percentage of its portfolio also covers a TALEN approach that is featured on the description of the company from their website. Gene editing methods are being explored in the treatment of human diseases and applications, but it will take a considerable amount of time and effort before these methods can be used in human applications. Meanwhile gene editing is having a major impact on customised bacterial development and crop breeding, and commercial applications of this research is likely to find its way to the market much sooner.

CRISPR is only part of the complete gene editing story, and by studying the patents associated with all of the various methods a much clearer picture of the entire field can be generated.

Tony Trippe is a senior patent analyst for Thomson Reuters.