A patent attack on three fronts 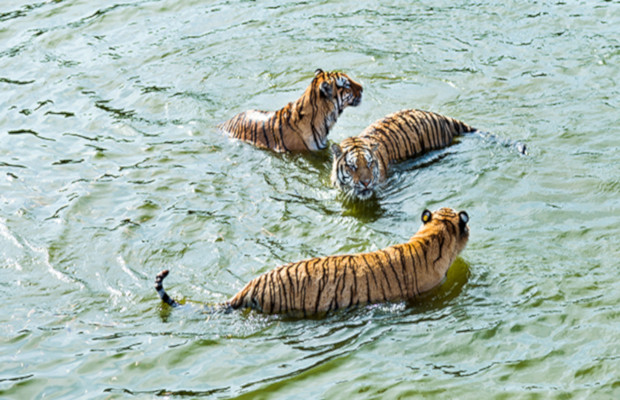 A recent case in India reveals the various ways in which pharmaceutical patents can be challenged, as Neeti Wilson, Arpita Kulshreshtha and Gitika Suri of Anand and Anand report.

The Indian patent system has been known for its strict prosecution of patents in the pharmaceutical sector ever since the product patent regime came into force in 2005. Furthermore, several opportunities are provided to third parties to challenge patent applications and make use of multiple pre-grant oppositions, while post-grant attacks are the norm for important pharma product patents.

The most recent example is that of a pneumococcal conjugate vaccine (PCV), Prevnar, which we discuss here.

Pneumococcal vaccines are based on capsular polysaccharide, which is poorly antigenic in children below two years of age, which is when there is the highest risk of mortality due to invasive pneumococcal disease (IPD). PCVs such as Prevnar 13, have been developed to overcome this problem.

Prevnar helps prevent infections caused by the 13 most common strains of Streptococcus pneumoniae. Pfizer’s subsidiary, Wyeth, filed a Patent Cooperation Treaty (PCT) patent application in 2006 covering Prevnar which was later nationalised in various countries including India. The claims of the patent application related to a 13-valent immunogenic composition for use as a vaccine, comprising polysaccharide-protein conjugates derived from 13 S. pneumoniae serotypes (1, 3, 4, 5, 6A, 6B, 7F, 9V, 14, 18C, 19A, 19F and 23F), each serotype being conjugated to a diphtheria toxoid variant carrier protein called CRM197.

The patent application for Prevnar has been challenged in countries such as South Korea, the US, Japan, China, etc. Its patent in Europe was revoked by the European Patent Office in 2014, and the decision is under appeal. The Indian case has seen much action before the Indian Patent Office (IPO). 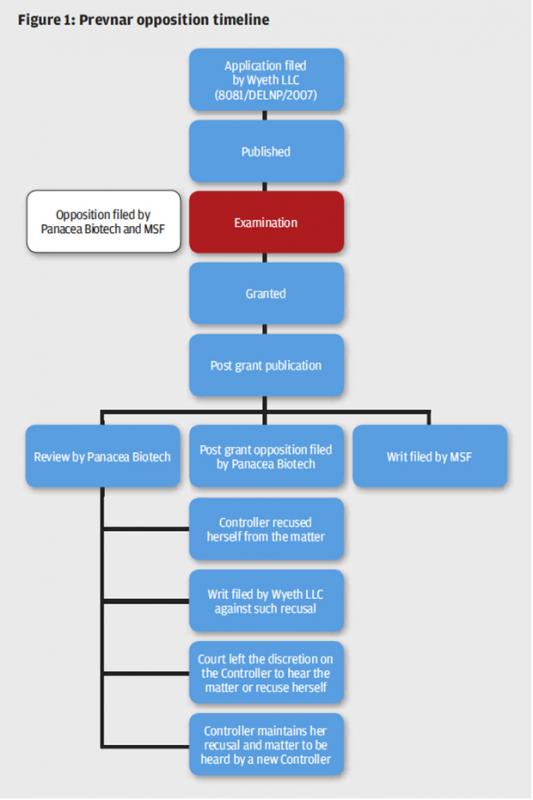 The Indian patent was granted on August 11, 2017, after a long battle before the IPO by dismissal of not one, but two pre-grant oppositions filed by (i) an Indian multinational company, Panacea Biotech; and (ii) the international, independent medical humanitarian organisation, Médecins Sans Frontières (MSF).

The timeline is illustrated in Figure 1.

The application was opposed on various grounds including novelty, inventive step, and being non-patentable subject matter under section 3(e) of the Indian Patents Act. The Controller eventually dismissed all the grounds and granted a patent (IN286321). The Controller held that the vaccine composition claimed is novel as none of the cited arts provides an enabling disclosure to arrive at a 13-valent vaccine wherein each serotype is conjugated to a single carrier CRM197.

Following various decisions of the courts in India including the Supreme Court relating to the inventive step of patents, the Controller relied on the evidence of the inventor, Peter Paradiso. The Controller also held that the composition is inventive as it cannot be achieved with a reasonable expectation of success.

Further, the composition was considered to be synergistic as it provides a range of surprising effects including an immunological response against all 13 strains despite challenges such as immune interference, increasing epitopic load, carrier-induced epitopic suppression, antigen competition, among others, and in fact it also gives cross-protection to an additional strain, 6C.

The first opponent, Panacea Biotech, filed a review before the IPO against the grant order. The fundamental law of filing review in India requires one of the following two circumstances:

Contrary to the grounds available under review, Panacea challenged the order on the grounds that there was a violation of the principles of natural justice and inherent bias as the IPO did not provide the company with a copy of amendments and it was not allowed to address Wyeth’s expert affidavit.

Before a hearing on the maintainability of the review petition, the Controller recused herself from hearing the review and the case was transferred to a new Senior Controller. Even more remarkably, Wyeth challenged the order transferring the matter to a new Controller in a writ before the High Court of Delhi (DHC).

Wyeth highlighted in the writ that the section 77(1)(f) of the Patents Act requires the Controller to review his/her own decision in a review petition. Even if not, it has been laid down not only by the High Courts but also by the Supreme Court in several decisions that a review has to be heard by the same hearing officer who passed the order, except in a scenario where the court/officer’s order has been extinguished, exhausted or is no longer in existence.

"The Controller maintained her decision to recuse herself and a new Controller will take over the review."

On direction by the DHC, the Controller filed an affidavit laying down the reason for her recusal. The court held that on one hand a hearing officer cannot be compelled to hear a matter, but considering the fact that there was no reason that could have deterred the Controller from hearing the matter and subsequently recusing herself, the court asked the Controller to reconsider her decision. In August 2018, the Controller maintained her decision to recuse herself and a new Controller will take over the review.

The second opponent, MSF, preferred a writ before the DHC, challenging the order dismissing its opposition. MSF also filed an application for expediting the writ hearing on the ground that the time period for filing a post-grant opposition was due to expire and delay would jeopardise its right to an alternative remedy. In August 2018, the court clearly held that a factum of filing a writ does not disqualify an opponent from filing a post-grant opposition.

"MSF also filed an application for expediting the writ hearing on the ground that the time period for filing a post-grant opposition was due to expire and delay would jeopardise its right to an alternative remedy."

A post-grant opposition was filed by Panacea on the very last day of expiry of the opposition period, ie, on August 11, 2018.

With the Prevnar patent grant being challenged in a review, a post-grant opposition and a writ before the DHC, it is an interesting case to follow at all three forums, each deciding on the same issues independently. As of now, Wyeth holds a valid enforceable patent for this important PCV.

Neeti Wilson leads the life sciences patent practice at Anand and Anand. She is admitted at the Delhi High Court Bar Association and is also a registered patent agent before the Indian Patent Office. She provides strategic advice on IP management and monetisation. She can be contacted at: neeti@anandandanand.c

Arpita Kulshreshtha is a patent attorney, handling matters related to life sciences, pharmaceuticals and chemicals. She specialises in prosecution of applications at the Indian Patent Office. She also handles revocation matters at the Intellectual Property Appellate Board and has worked on patent litigation matters. She can be contacted at: arpita@anandandanand.com

Gitika Suri is a biotechnology engineer trained in the field of biostatistics, microbiology, plant tissue culture, immunology and immunodiagnostics. A registered patent agent and lawyer, she has been involved in patent drafting, filing and prosecution, opposition matters,  and contentious proceedings. She can be contacted at: gitika@anandandanand.com