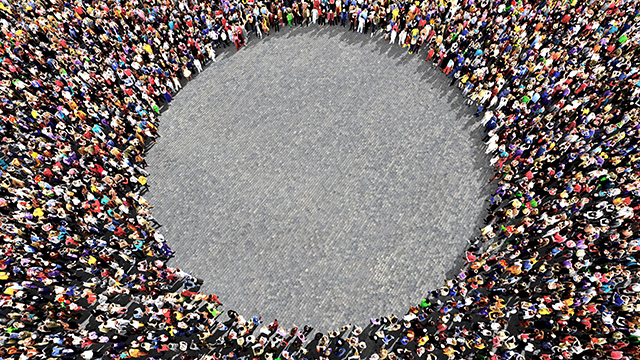 Parties can apply for a compulsory licence in India on several grounds, including that the invention is not worked in the country. Neeti Wilson of Anand and Anand explores the issue further.

This year marks a decade since product patents in the area of pharmaceuticals have been allowed in India. Generic pharma companies have finally accepted that such patents are here to stay. Pharma product patents are being opposed before the Indian Patent Office (IPO), are the subject of revocation actions before the Intellectual Property Appellate Board (IPAB) and of compulsory licences (CLs), and are being litigated for infringement (more recently we have seen settlements out of court).

Indian patent law, including CL provisions, is TRIPS Agreement-compliant. There is also a specific CL provision for the export of patented pharma products to least developed countries or countries with no manufacturing capacity, based on paragraph 6 of the Doha Declaration. It is pertinent to note that the statute does not distinguish between technological areas of inventions for CLs, but the recent trend indicates CL activity is only in the pharma sector.

After three years from the grant of a patent, any interested person may make an application for a CL (section 84, Patents Act, 1970) on the grounds that the patented invention:

(a) Does not satisfy the reasonable requirements of the public;

(b) Is not available to the public at a reasonably affordable price; and

(c) Is not worked in the territory of India.

The patentee has the right to be heard in the CL application process. Interestingly, after the grant of a CL on the ground of not working the invention, if it is still not worked the patent may be revoked by an interested party (section 85).

The government may, citing the public interest, allow a licensee to import the patented invention. In a case of national emergency or extreme urgency the government can allow public non-commercial use of a patent (section 91/92). In cases of a public health crisis, a CL is to be granted as fast as possible and the patentee is to be informed about that.

As non-working of a patent is a ground for a CL, the statute has a specific requirement for every patentee and licensee to submit an annual statement of commercial working of their granted patents (section 146). Information must be submitted stating whether the patented invention has been worked or not. If the patent is not worked, the patentee is required to provide reasons for not working it and steps being taken for working it. What amounts to working is not clearly defined in the Indian statute; importation may constitute working without manufacturing the patented product in India.

When a patented invention is worked, information on the quantity and value of the patented product manufactured in India and those imported from other countries needs to be submitted. The granted licences are to be disclosed and a statement on whether the public requirement has been met partly, or adequately, or to the fullest extent at a reasonable price, is also required to be recorded. The requirement of law is limited to working the patent in India.

Until now the filing of statements was not being taken very seriously, even though there were penalties involved, but recent CL cases have brought them to the limelight.

In August 2015 a case was filed before the Delhi High Court (Shamnad Basheer v Union of India) seeking (i) directions for the government to perform its statutory duty to enforce norms relating to disclosure of working of patents; and (ii) constitution of an expert committee to improve the current format of the working disclosure. It will be interesting to follow the case and watch the stance taken by the government in the matter.

On July 13, 2007 Roche had an Indian patent covering Tarceva (erlotinib) granted and a CL application was file on September 14 that year. Similarly, Sugen and Upjohn (later acquired by Pfizer) got a patent directed to Sutent (sunitinib) granted on August 31, 2007 and then a CL was filed shortly after, on September 17. The generic therefore seemed to have prepared the CL application in advance and waited for the patent to grant before applying.

Several CL applications have been filed before the IPO and Ministry of Health (see Table 1). 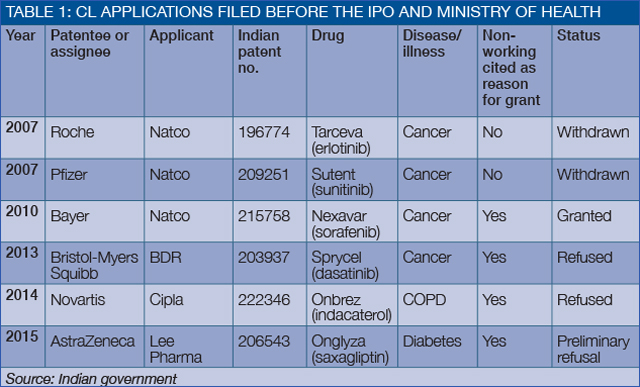 In the Cipla CL application for Novartis’ product Onbrez, Cipla had petitioned the Department of Industrial Policy & Promotion saying that because of chronic obstructive pulmonary disease (COPD) being in epidemic proportions, the central government should grant a CL as it was an extreme emergency and also revoke the patent on the ground of being generally prejudicial to the public. These petitions were refused.

Novartis also sued Cipla for infringing its patents covering Onbrez and obtained a temporary injunction against Cipla. It has been reported that Cipla proposed to pay a reasonable royalty to sell its generic version of Onbrez, but the offer was refused.

There is a lot to look forward to in the area of statements concerning the working of patents and CLs for pharma products in India.

Neeti Wilson is a partner at Anand and Anand. She practises mainly at the Indian Patent Office as well as at the plant variety registry and IPAB. She specialises in compulsory licensing and patent opposition, and she is a member of AIPPI. She can be contacted at:
neeti@anandandanand.com