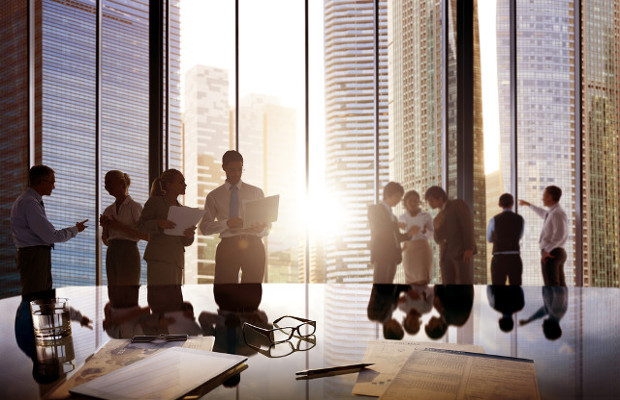 Oppositions to a patent covering the CRISPR/Cas9 system illustrate the need for applicants to carefully consider making statements on commercially important technology even after a patent application has been filed. Catherine Coombes of law firm HGF reports.

The identification of the clustered regularly interspaced short palindromic repeat (CRISPR)/Cas9 system for gene editing of eukaryotes has led to an explosion of research in this area due to the far-reaching applications of the system. This in turn has led to a race to carve out valuable commercial protection for CRISPR/Cas9 and use of this system in various applications.

In some bacteria, such as streptococci, CRISPR systems are present as part of a protective system against foreign DNA (such as viral DNA). Following invasion by a virus, a portion of the viral DNA is incorporated as a spacer (ie, in the space between two CRISPRs), providing a form of ‘memory’. Following subsequent invasion, the CRISPR system recognises the virus and produces an enzyme, Cas9, to cut up the viral genetic material.

The discovery that this bacterial defence system can be employed in eukaryotes to find, cut and replace DNA at a specific location has resulted in a major breakthrough in gene-editing technology.

Every few years, a breakthrough in science occurs and, much as we are currently seeing with CRISPR/Cas9, scientific groups throughout the world race to (i) lead scientifically and (ii) commercially protect the results of their research. In an ideal world these two aims go hand in hand, with the group that leads the scientific breakthroughs gaining both the scientific accolades and successful commercial protection.

The road to patent rights

Blazing the trail to secure the European patent rights to the underlying CRISPR/Cas9 technology are two groups: one led by Feng Zhang of the Broad Institute and Massachusetts Institute of Technology, the other by Jennifer Doudna of the University of California, Berkeley and Emmanuelle Charpentier of the Helmholtz Centre for Infection Research.

In November 2014, the group led by Doudna and Charpentier received the 2015 Breakthrough Prize in Life Sciences for “harnessing an ancient mechanism of bacterial immunity into a powerful and general technology for editing genomes, with wide-ranging implications across biology and medicine”. However, the interplay between academia and the commercial world requires careful consideration.

Here, we analyse some of the patentability issues arising from what is a fast-moving area of science and pre-grant patentability attacks in the form of third-party observations (TPOs), identified from the publicly available file histories of European patent applications of the two main groups.

Figure 1: Timeline of filings by the Zhang and Doudna groups 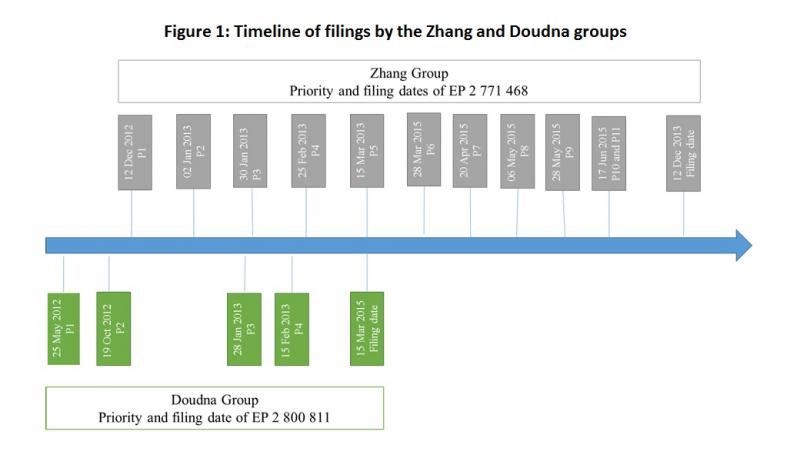 A technical problem put before the European Patent Office may be regarded as being solved only if it is credible that substantially all claimed embodiments exhibit the technical effects upon which the invention is based. Therefore, a balance needs to be struck between filing early enough in a first-to-file system while ensuring that the technical problem is credibly solved. This can be extremely difficult in an emerging field.

One strategy that can be used is to file a series of priority documents: filing a new application as and when additional information becomes available. Figure 1 demonstrates the timeline of filings by the Zhang (EP 2 771 468) and Doudna (EP 2 800 811) groups.

As can be seen from Figure 1, Doudna was the first to file a patent application, on May 25, 2012. However, one common theme in the various TPOs against that application is an allegation that the invention is not entitled to priority due to credibility issues. In this regard, it is alleged by the TPOs that the first priority document (P1) contains only a single test-tube biochemical cell-free in vitro experiment and otherwise lacks the necessary information for an effective CRISPR/Cas9 system cellular system. The TPOs draw on later published scientific publications which allegedly show that guide RNA molecules corresponding to those used in P1 and the second priority document (P2) of the Doudna patent do not work in eukaryotic cells.

Further, much emphasis is placed on the fact that P1 is silent on the role that protospacer adjacent motif sequences play. Therefore, a lack of enablement as well as plausibility arguments have been put forward to allege that the Doudna application is not entitled to either the first or second priority date.

In a fast-moving area, filing multiple priority documents can aid in attempting to secure the earliest possible date on which the invention is credibly solved. This allows a group to frequently publish in order to maintain its reputation in the field while optimising commercial protection. However, the interplay between priority filings and publications needs to be carefully managed. In particular, care needs to be taken to ensure all new information is filed in a priority application before publication so that all the new information can be used to maintain the earliest possible priority date.

Figure 2 provides a timeline showing the interplay between the priority and patent application dates in relation to EP 2 800 811. Priority and patent application dates of the Doudna group are shown in green, while publications by the Doudna group are in orange and two pertinent third-party publications in blue. The boxes in red indicate considerations in view of these documents.

As can be seen, between the filing of P1 and P2 by the Doudna group there was an intervening publication by the same group. Unfortunately, it would appear that at least figures 1 to 4 of this publication contained new information, which was only later incorporated into the second priority filing. Accordingly, as new matter is not entitled to claim the priority date of P1, such new matter disclosed in P2 that appeared in the intervening publication is not considered novel and cannot be used to secure the second priority date of October 19, 2012.

As a result, the TPOs allege that there is nothing novel in P2 which would make the invention credibly solved. This highlights the need to review new publications against what is actually filed in a priority patent application to ensure publications do not disclose more than what is in the priority document. If, upon review, there is additional data, it may be prudent to assess whether to either remove the new information from the publication or file a further priority document with the new information before publication. 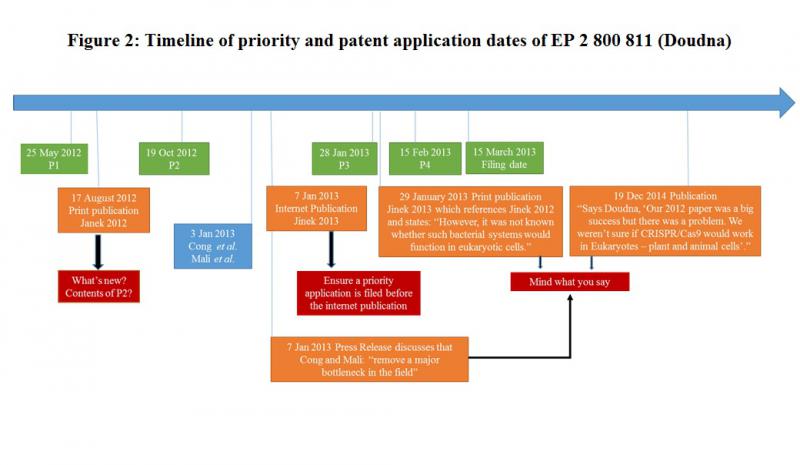 Another patentability issue raised against Doudna’s patent is the internet publication of RNA-programmed genome editing in human cells by Jinek et al in 2013 just a few weeks before the submission of the third priority document (P3). Four days after two papers were published by third parties on January 3, 2013, a press release was issued by the University of California, Berkeley commenting on these third-party publications and, critically, providing a link to Jinek 2013. The TPOs hypothesise that the press release may have been brought forward in view of the third-party publications and with it the availability of the inventors’ 2013 publication.

In any event, the result is that the TPOs draw on this alleged early publication of Jinek 2013 to assert that the new data added in P3 is anticipated by Jinek 2013. Therefore, the TPOs allege that the P3 is not enabled by the new matter, or to the extent that it is, it lacks novelty.

What you say will be used in evidence

This highlights the need for careful review before publication of press releases, and in fact all forms of publications, and to consider whether a further priority filing is needed before such publication.

“In patent proceedings third parties can, and will, attempt to use what you say against you.”

In the prosecution of Doudna’s patent, comments made by Doudna are being used by third parties to allegedly demonstrate that the patent application is not entitled to priority. Comments made by the inventors in the press release of January 7, 2013, in the publication by the inventors in 2013 and in their later publication in 2014 are all being used to argue that a skilled person would not find it credible that substantially all claimed embodiments would exhibit the technical effects upon which the invention is based.

For example, in the 2014 publication Doudna is quoted as stating: “Our 2012 paper was a big success but there was a problem. We weren’t sure if CRISPR/Cas9 would work in eukaryotes—plant and animal cells.” As the 2012 paper was published after the filing of the first two priority documents, the TPOs submit this in an attempt to illustrate that the invention was not credibly solved by the first two priority documents.

In patent proceedings third parties can, and will, attempt to use what you say against you. In TPO and opposition proceedings it is common for a third party to review later publications by the inventors to see if there are any comments which may aid arguments against an invention, particularly those that may confirm embodiments of an invention do not work. The attacks made on Doudna’s patent illustrate the need to carefully consider statements regarding commercially important technology, even after a patent application has been filed.

The battle over what protection Zhang and Doudna will secure for the CRISPR/Cas9 technology in Europe continues. The Doudna patent application is still pending. While the Zhang patent application has proceeded to grant in Europe, it is currently in the nine-month opposition period and opposition proceedings are expected. Uncertainty over the ultimate rights to the underlying technology causes issues for third parties wishing to use the system and this author is aware of at least one institution that is avoiding the use of CRISPR/Cas9 as a result.

Furthermore, the September 25, 2015 announcement by Zhang’s group on the potential for CRISPR/Cpf1 as an alternative system will generate further research and no doubt lead to further investigations of other CRISPR enzymes.

In this highly evolving field, it can be vital to maintain the earliest possible priority date to avoid patentability issues arising from intervening publications. Lessons can be learned from CRISPR/Cas9 about how research groups can better marry the need to lead scientifically while securing valuable commercial protection.

Catherine Coombes is a senior patent attorney at HGF. She can be contacted at: ccoombes@hgf.com