IPR and biopharma patents: what the statistics show 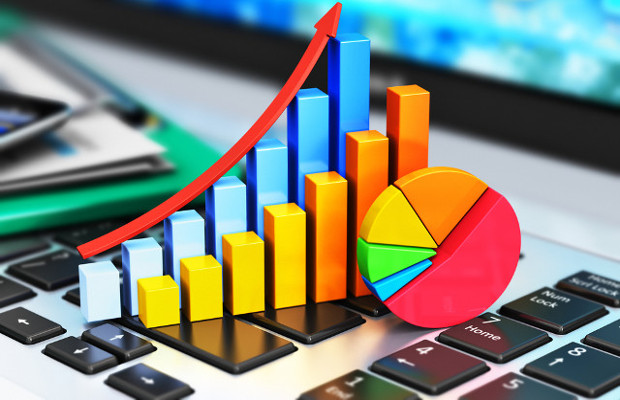 Fewer IPR petitions are instituted against biotech and pharma patents, and there is a higher survival rate of instituted claims in final written decisions compared to all technical fields combined. Melissa Gibson and Ruben Munoz of Akin Gump analyse the statistics.

The purpose of introducing inter partes review (IPR) proceedings through the America Invents Act was, at least in part, to improve the US patent system. IPR proceedings held before the Patent Trial and Appeal Board (PTAB) were viewed as a faster and cheaper mechanism for challenging patents than litigation in federal courts. In particular, the introduction of IPR proceedings was intended to counterbalance district court lawsuits filed by non-practising entities by giving accused infringers an expedited proceeding to challenge the asserted patents.

This article examines the institution decisions and final written decisions for bio/pharma patents and provides potential reasons for two observable trends that are markedly distinct from those observed across all technical fields as a whole.

Specifically, a smaller percentage of petitions is instituted against bio/pharma patents, but there is a higher survival rate of instituted claims in final written decisions compared to all technical fields combined. Our analysis of these trends and the potential reasons for them follows.

When IPR petitions are filed, they are assigned to different technical centres—for classification purposes—based on the subject matter of the challenged patent. Bio/pharma patents are assigned to technical centre 1600; as of September 30, 2015, 305 out of a total of 3,578 IPR petitions (nearly 10%) were classified under this centre. Figure 1 provides the current institution status of the bio/pharma IPRs. 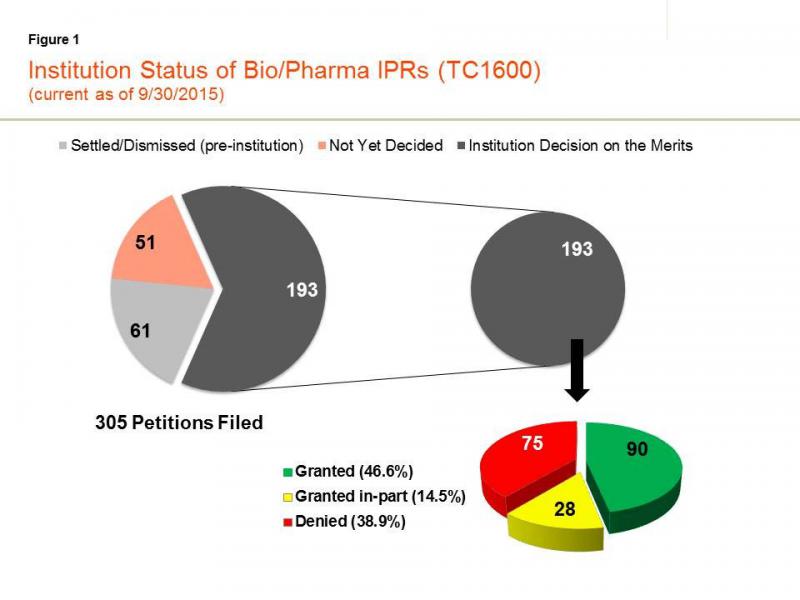 Figure 2 illustrates the number of petitions filed per fiscal year for each USPTO technical centre. The number of IPR petitions dramatically increased each year across almost all technologies—a tacit indication that patent challengers are gaining confidence about their chances of successfully challenging patents through IPR proceedings. 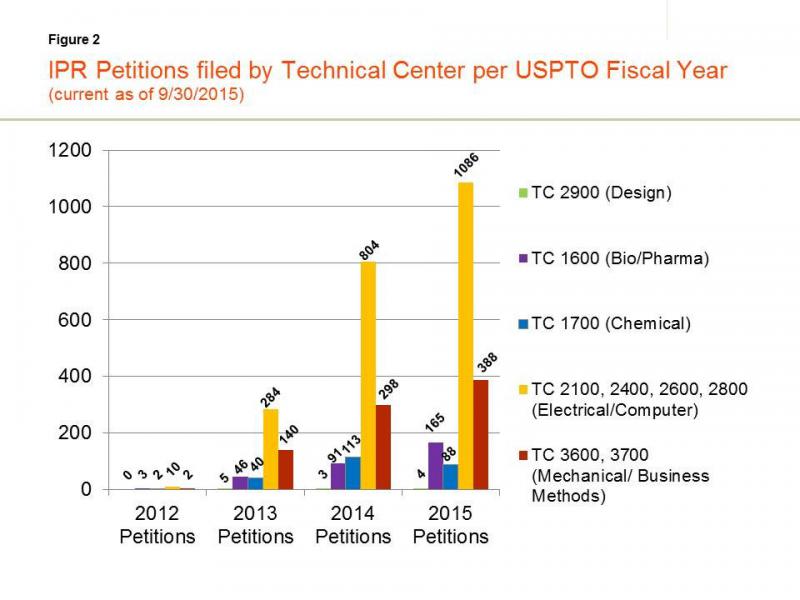 However, this confidence may be misplaced in the bio/pharma arts. A closer look at the outcomes of institution decisions and final written decisions indicates that the PTAB is less likely to institute a bio/pharma IPR petition. Moreover, even upon institution, the instituted claims are more likely to ultimately be deemed patentable by the board when compared to IPRs filed across all technical fields. 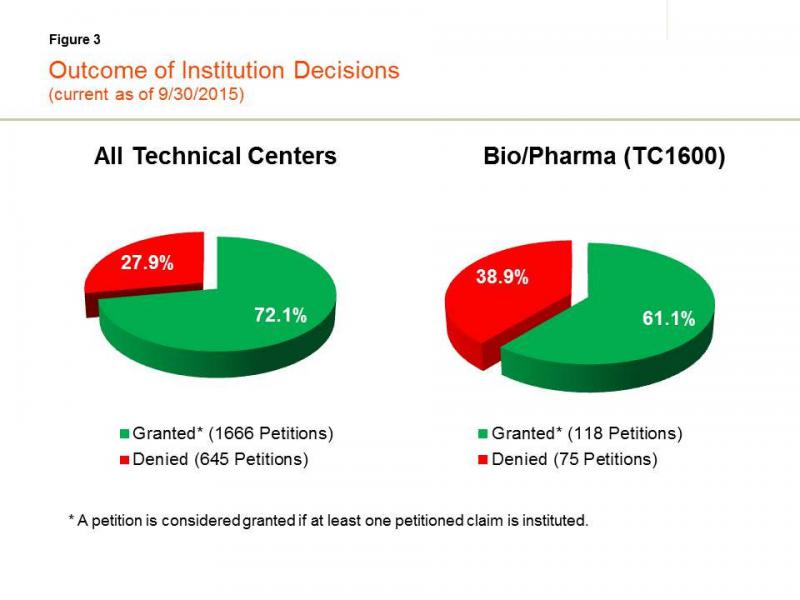 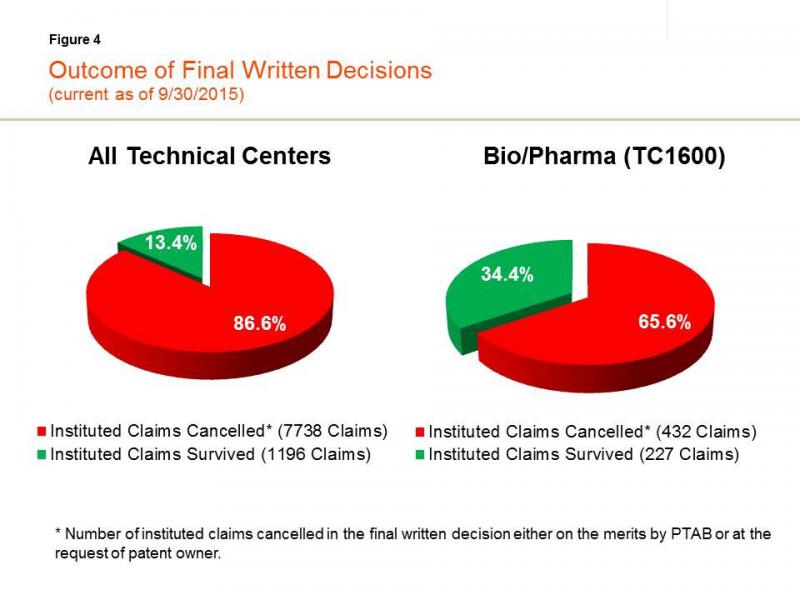 Although the considerable differences in the likelihood of confirming the patentability of challenged and instituted claims in the bio/pharma arts is encouraging for bio/pharma patent owners, understanding the reasons behind this difference may help patent owners devise more effective strategies in these proceedings.

Petitioners are less successful at challenging the patentability of bio/pharma patents than those across all technology areas. As illustrated in Figure 3, a smaller percentage of institutions were granted in the bio/pharma arts compared to all technology areas. The instituted claims in bio/pharma patents have a 20% greater survival rate than the average survival rate for all IPRs in which a final written decision has been issued, as shown in Figure 4. Therefore, bio/pharma patent owners are more likely to convince the board that the instituted claims are patentable between the institution of the petition and the final decision.

So what makes bio/pharma patents more difficult to challenge than the other technologies? Due to the generally unpredictable nature of the claimed inventions in the bio/pharma arts, it is harder to convince the board that the petition should be instituted. The unpredictability related to the inventions in this field is particularly relevant to the obviousness analysis, which is often the basis on which claims are instituted. As the data show, bio/pharma petitioners are generally less successful in establishing that there is a reasonable likelihood that the claims are unpatentable. This lower success rate at the institution stage may be due to the difficulty associated with making an obviousness showing in the unpredictable arts, as compared to other fields.

Moreover, even on institution of the petition, the patent owner can submit an expert declaration establishing the unpredictability of the claimed invention. Before institution, patent owners are allowed to file a preliminary response, but they are not permitted to rely on new expert opinions. However, once the claims are instituted, it is common practice across all technical areas for patent owners to file responses that are supported by expert declarations.

These expert declarations may be especially convincing in an unpredictable technical area, such as the bio/pharma arts, in establishing that the purported invention was not obvious at the time of invention. Therefore, a credible expert declaration establishing the unpredictability of the claimed invention may be critical to ensuring the survival of patent claims during an IPR proceeding.

Disclaimer: All statistics reported in this article are calculated using the data compiled from the USPTO Patent Review Processing System, the Patent Trial and Appeal Board Statistics (September 2015), and Docket Navigator.

Melissa Gibson is counsel at Akin Gump. She can be contacted at: mgibson@akingump.com

Ruben Munoz is counsel at Akin Gump. He can be contacted at: rmunoz@akingump.com