How to protect therapeutic methods in Brazil 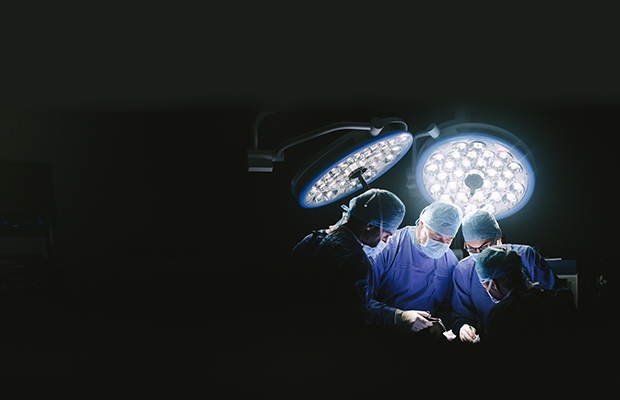 Brazil’s patent law does not allow methods of treatment to be patented, but there are other means of getting protection, according to Kene Gallois and Samantha Salim of Daniel Law.

Unlike US patent law, which does not exclude therapeutic methods from patent protection, Brazil’s patent system follows a similar rationale to Europe’s: that “methods of treatment” are not patentable.

The non-acceptance of therapeutic method claims in Brazil is grounded in the provisions of article 10(VIII) of Brazilian IP Law # 9,279/96, which establishes that therapeutic, surgical and diagnostic methods applied to the human or animal body are not considered to be inventions.

Therefore, methods having at least one invasive/administration step and/or methods with the purpose of cure, prophylaxis or diagnosis are usually non-patentable in Brazil.

Different types of claim language are used to protect medical inventions, depending on the legislation and the patent office’s guidelines for examination.

Although therapeutic methods are not patentable in Brazil, a substance or composition may be patented for a specific therapeutic use through so-called Swiss-type use claims.

"A substance or composition may be patented for a specific therapeutic use through so-called Swisstype use claims."

According to the Brazilian Patent and Trademark Office’s (INPI) Rule 169/2016 (Guidelines for the examination of Brazilian patent applications), the format currently accepted for second medical use claims is the Swiss-type one, as follows: “Use of a compound of formula X characterised by being in the manufacture of a medicament to treat the disease Y”.

There is an important difference between Brazil and Europe: “product for use” claims (“Substance X characterised by being for use in the treatment of, or for treating, a disorder Y”) currently accepted in Europe are considered therapeutic methods by INPI and, therefore, are not eligible for patent protection.

On the other hand, as is the case in Europe, “use for treating” claims (“Use of the compound X characterised by being for treating a medical condition Y”) are also interpreted by INPI as therapeutic methods.

The main aspects for assessment of patentability requirements of medical use claims in Brazil are: novelty, inventive activity, sufficiency of disclosure, and accuracy, are summarised in Table 1.

Although “product for use” claims are considered to be therapeutic methods by INPI, it is possible to draft product claims including therapeutic features, provided that the product is already defined accurately by its components. 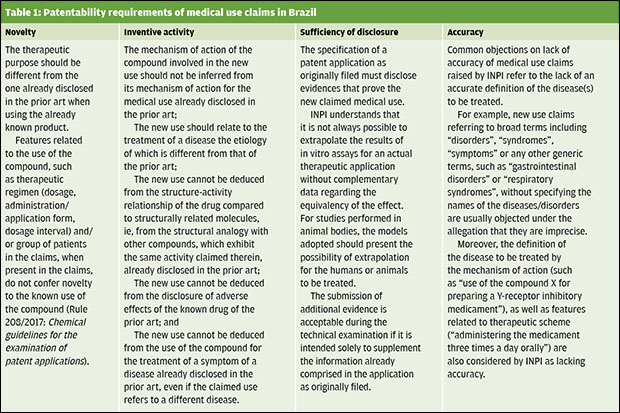 In this case, the therapeutic feature will be considered as an additional definition of the claimed product and will not be considered relevant to assess the novelty requirement of the compound, which is evaluated based on the components thereof.

Although methods of treatment are not considered to be inventions in Brazil, medical inventions related to therapeutic purposes are patentable if drafted according to Brazilian practice and if they fulfil the patentability requirements.

Applicants should be aware that there are significant differences regarding the claim format for medical inventions related to therapeutic purposes accepted by different patent offices, so it may be necessary to adapt the claims if the application is initially prosecuted via the Patent Corporation Treaty and then continued to a national phase.

Kene Gallois is the head of life sciences at Daniel Law. She has been working with patents in the areas of biotechnology, pharmacy, chemistry, agriculture, food and cosmetics since 2009. In 2015, she joined Daniel Law, where she coordinates the Life Sciences Division. She can be contacted at: kene.gallois@daniel-ip.com

Samantha Salim is a patent specialist at Daniel Law. She has been working with intellectual property since 2010 and joined Daniel Law in 2015. Her expertise covers the prosecution of patent applications at INPI and the National Agency for Sanitary Surveillance. She can be contacted at: samantha.salim@daniel-ip.com